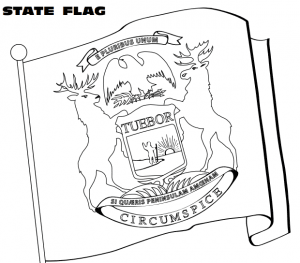 Michigan’s present state flag was adopted by the Legislature in 1911 with a simple phrase: The State Flag shall be blue charged with the arms of the State. This is Michigan’s third flag. The state coat of arms appears on both sides. The first flag, bearing the State Seal, a soldier, a lady on one side and a portrait of the first governor, Stevens T. Mason, on the other, was first flown in 1837 the year Michigan became a state. In 1865, the second flag carried the state coat of arms on a field of blue on one side and, on the reverse side, the coat of arms of the United States. The state flag flies over the Capitol on the main flagstaff, just below the flag of the United States. At the top of the seal, you will notice the words, E Pluribus Unum. These words come from our national motto meaning, From many, one. which means that our nation or country was made from many states.

The word Tuebor means I will defend and has reference to the frontier position of Michigan. The State Motto is Si Quaeris Peninsulam Amoenam, Circumspice, which means If you seek a pleasant peninsula, look about you.

Just as our American flag has a pledge, so too does our state flag. The Legislature enacted Public Act 165 of 1972 to declare the following pledge, written by Harold G. Coburn, as the official pledge of allegiance to the state flag:

“I pledge allegiance to the flag of Michigan, and to the state for which it stands, 2 beautiful peninsulas united by a bridge of steel, where equal opportunity and justice to all is our ideal.”